The DBSZ concept can be described more as a silhouette rather than a replica. Nevertheless it is a true Aston Martin in appearance, luxury and performance.

Click on the link below to view the DBSZ brochure or feel free to call us to discuss this exciting classic car. Naturally, we are always happy to assist in any enquiry relating to Aston Martin’s and other fine sports and exotic cars. 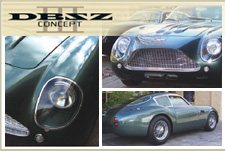 The DEvaux Coupe and Spyder

The Devaux Coupe and Spyder are hand built modern homages to the beautiful European sports cars of the late 1930s. They are a romantic interpretation of cars such as Bugatti, Delahaye, Delage and Talbot-Lago.

Designed by local Industrial Designer David J Clash based here in Melbourne Victoria, the initial sketches of the car were drawn in 1988. Several years went into the design and sculpting of the bodywork, and a Jaguar powered 3.4L Special was built with help from his father.

In the early 2000s the car was re-engineered with new chassis frame, running gear and minor changes to the bodywork. The first production prototype used a Ford straight-six 4L engine, whereas subsequent cars have the GM LS1 5.7 V8 both in automatic and manual variants.

Indeed, the Devaux (named after his mother’s French connection) captures the essence of some of the world’s finest 1930s cars. Those who know their automotive history readily identify these elements, a beautiful era when cars were designed by artists and built by craftsmen.

To receive our latest news, please enter your email address